Search the best hotels in Mexico

Brightly coloured cities and celebrations; punchy flavours; vast murals and big art; ancient, ancient civilisations; vast deserts where it's cactus only up to the horizon; steaming-jungle-fringed perfect beach resorts with bright oceans - thinking of Mexico makes you think big and bold. Diverse and cosmopolitan in places, and pristine and ancient in others, this is an incredible country. And unsurprisingly one of the world’s most popular tourist destinations. Visiting Mexico is about getting out there in amongst it in the sunshine, whether ‘it’ be the outdoor market places of a big city, a dense jungle, under the ocean, up a desert mountain peak, or just on the beach. You should also eat widely. And be open to street food and palapa, or thatched roof, establishments, and to agave-based liquors! With so much variety on offer it can be a daunting task to pick the best places to stay in Mexico, but we've done the hard work for you! Here's our pick of the best places to visit and why....

Some of our Mexican Collections:

Many of the best places to stay in Mexico, as far many visitors are concerned, are clustered along the spectacular coastline of the Yucatán Peninsula, the Riviera Maya and the Baja California Peninsula. Or, of course, that classic city break, Mexico City, one of the world’s biggest cities by population, and a sizzling skillet of strong colours and flavours.

Around Mexico City are the central states, above that are the historic silver mining states, in the region called The Bajio, and the desert states of northern Mexico, a region not much visited by tourists.

The last region is the Pacific Coast, where you’ll find Oaxaca, Jalisco with its capital Guadalajara, and sophisticated party town, Acapulco - in the town's heyday this was where JFK took Jackie on their honeymoon.

Taxco is a mountain town known for its silver, the Sea of Cortez, near La Paz, is where you can swim with whales and dolphins - and it’s much loved by kayakers.

If you’re interested in ancient Mexico you might also want to visit Puebla, known for traditional food, colourful pottery, friendly weather, colonial architecture and for being located between the two ancient indigenous settlements of Tlaxcla and Cholula, Cholula being the largest man-made monument ever constructed.

You’ll also want to visit the Yucatán Peninsula. Its coastline is a colourful display of bright azure waters, lush green jungle, white sands and silvery Mayan ruins. Its colonial cites are graceful, its resorts lively and its landscape - dotted with small villages and run through with national parks and biospheres - is largely unsullied by overdevelopment or unsightly construction. This is where you’ll find some of the world’s best diving and snorkelling, both at sea and in the strange cenotes or sinkholes which lie underneath the jungle. Some visitors are here for the pristine white sands of these Caribbean waters. For some people its the fun side of the resorts, with their party atmosphere, which is the main draw, and for some its the region’s wonderful history and incredible archaeological treasures and ruins.

Quintana Roo is the flashy bit of the Yucatán Peninsula. The bit with the spectacular Caribbean coastline and a scattering of incredible Mayan Ruins. Home to famous beach holiday destinations Cancún, Playa del Carmen, Cozumel and Tulum, Quintana Roo’s jungle interior has some wonderful Maya-Mexicano communities, as well as the spectacular ancient sights at Coba. Yucatán is the northern part of the peninsula, it’s where you’ll find Mérida, the region’s jungle-set colonial cultural capital. Valladolid is the other great Spanish colonial era city in Yucatán, and as well as being beautiful in its own right it’s also the closest city to Chichén Itzá, the Yucatán’s largest and most famous Mayan ruin - and included in the list of the New Seven Wonders of the World.

The Baja Peninsula has some of Mexico’s most wild and dramatic sea and landscapes, incorporating highlights like dormant volcanoes, old mission towns, brightly coloured rock formations, mysterious canyons, and people relaxing by beach shacks eating tacos and watching the sun set over the Pacific while other people surf incredible waves.

It’s hard to imagine what you might consider unmissable across this vast and varied country, but here's our pick:

Use our guide to the best places to stay in Mexico and start to plan your trip of a lifetime!

The Best Places to Stay in Mexico

The Best Places to Stay in Mexico City

The Best Places to Stay to Experience the Yucatán Peninsula

If you fancy the beach you may also want to check out our list of the 15 Best Beach Hotels on Mexico's Pacific Coast? Or the 25 Best Hotels on the Riveira Maya?

The Best Places to Stay in Mexico for Foodies

The Best Places to Stay for Traditional Mexico

Still not sure which is the best place to stay in Mexico for you?

See all » 67 hotels in Quintana Roo

See all » 22 hotels in Mexico City

See all » 20 hotels in Jalisco

See all » 13 hotels in Guerrero

See all » 67 hotels in Quintana Roo

See all » 22 hotels in Mexico City

See all » 20 hotels in Jalisco

See all » 13 hotels in Guerrero 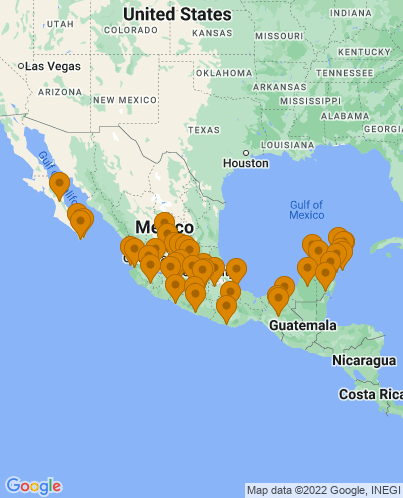