Search the best hotels in Australia

Australia is breathtakingly big. And presented in some kind of super-technicolor. And spectacularly beautiful. It feels new, and its young cities bubble with ideas, yet its Aboriginal culture is ancient - but you’ll really have to seek this out if you want to find it. And for many visitors it’s hard to get beyond the scale and the colours. The best places to stay in Australia are numerous, but our guide below will outline which regions and cities are good for what, so will help you narrow the options!

Alternatively you might fly into Melbourne in the state of Victoria. Victoria knows about food and wine. It also knows how to host events with the Victorian 'season' having world class festivals, sporting and cultural events. Cosmopolitan Victoria also has its share of Australia's natural beauty - from the majesty of the Great Ocean Road with the Twelve Apostles jutting out like knives from nowhere, to the lush tranquility of the Yarra Valley, or the colourful haze of the Grampians National Park. Then there are the old gold mining towns and the penguin parades at Philip Island. Not to mention the sport…

If you fly into Brisbane you’ll be landing in the state of Queensland, known as ‘The Sunshine State’. Queensland has a lot more to offer than perfect beaches, but there’s so much to do on the coast, what with the Great Barrier Reef, the Whitsunday Islands, the Gold Coast and the Daintree Rainforest, that you might not make it further inland to the mountain ranges, sugar cane fields and dry mining towns.

An Australian adventure without a visit to the 'Top End' - the Northern Territory - is a missed opportunity. This is where you'll find the magical red desert of Uluru and the wondrous wetlands of Kadadu National Park and state capital, Darwin, sprawling in its tropical humidity, a rival for the title of the world’s most laid-back city.

The Northern Territory, with its unforgiving outback and seriously deadly critters is a bit like the wild west. The stunning, serene billabongs are home to crocodiles who might eat you. And some of the pristine beaches are lined with box jellyfish - though not all of them. The desert is big and dry, and the rock formations haunting, and people do get lost. But this is spectacular landscape on a large scale, and a culture entirely its own.

If you land in Perth, you’re in Western Australia: a region pf desert pricked by rock formations, of farming scrub, eucalyptus forests and green granite mountains ranges known for their deep gashing gorges, all lined with young, golden, leisure-oriented beach towns and cities. Not many tourists venture far from the visitor hubs of Margaret River, the Swan Valley, Broome, Monkey Mia or the Ningaloo Reef. But they should.

Mining has made much of Western Australia rich, but this is still an unpolished place dotted with remote outback towns which might feel like they come from another age. Even in cosmopolitan Perth you can still sometimes feel the grit of the desert.

Western Australia's other natural assets, its chalky, wine friendly soil, and the treasure trove of pearls off its coastline, have also contributed to the state's wealth. But nothing can diminish the distances those who live here have to travel to get anywhere else. Though of course the spectacularly empty views have made W.A. a darling of photographers.

South Australia is also known for its wine, with the Barossa Valley and McLaren Vale, both just outside Adelaide - South Australia’s elegant, arty capital from which much of the life of this state radiates, dwindling as it hits the bone dry land beyond, where temperatures regularly hover around 48 degrees.

Underneath this unforgiving, stoney land are mineral veins on which tiny townships suckle, and beyond that are the hazy colours of the Flinders Ranges. But around Adelaide the land is lush - perfect for wine growing, and beyond that the sea is packed with tuna and lobsters, creating the perfect conditions for a foodie heaven.

A lot more than a pristine island after-thought, Tasmania is a step back in time. Hobart is a step back a few decades, to when there was a grater feeling of space wherever you went in Australia, but some of Tasmania’s pristine wildernesses are a step back in millennia.

Island isolation has protected this diverse and precious ecology, and kept the population low, so Tasmania is now home to some of the world's rarest plants and animals. The craggy peak of Cradle Mountain, the wide scoop of Wineglass Bay, the great stretches of peaceful sand on Seven Mile Beach and the peaceful green-grey of the Huon Valley are all pristine and unmissable for anyone interested in the beauty of the great outdoors.

Curiously small, and with a layout planned by a single architect, green and open Canberra isn’t like most capital cities. Not in the way that either Sydney or Melbourne could be. While Canberra isn’t the most charming of cities, it does have some excellent facilities and plenty of money to run them. Firstly there are the two parliament buildings, the new one which is built into a hill, then there’s the National Art Gallery, National Library, National War Memorial, the Science Museum (Questacon), National Film and Sound Archive, the Australian Botanic Gardens, the National Portrait Gallery, the Canberra Museum, the Royal Mint, and all the embassies.

It’s really hard to recommend the unmissable across a whole continent. But…

Use our guide to the best places to stay in Australia and start to plan your trip of a lifetime!

The best places to stay in Australia

Still not sure which is the best place to stay in Australia for you?

See all » 50 hotels in Queensland

See all » 21 hotels in Tasmania

See all » 50 hotels in Queensland

See all » 21 hotels in Tasmania 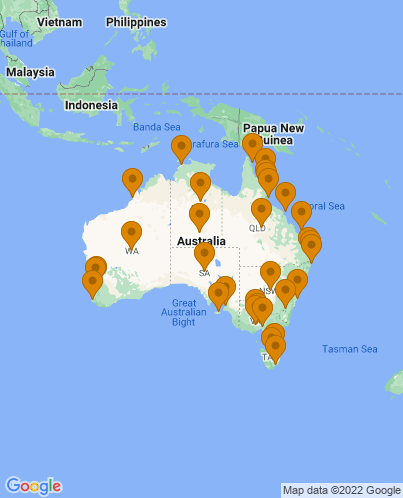